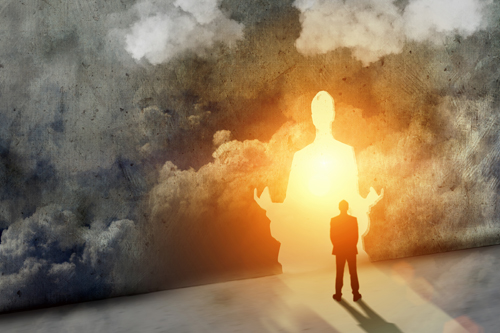 Let’s say, for argument’s sake, that you find Western secular culture a breeding ground for the worst human values and qualities, from unquenchable selfishness and greed to unconscionable meanness and hard-heartedness. You are disgusted by the moral free-for-all that profits no one except the insanely rich. You hunger for a saner world than secular culture fosters—one committed to enriching, rather than obliterating, human dignity.

But you don’t feel stirred by immaculate conceptions, burning bushes, reincarnation, and other staples of the world’s religions. Nor do you feel nourished by the New Atheists—I am thinking of Richard Dawkins, Sam Harris, and Christopher Hitchens—who despise religion and argue that it’s a threat to democracy and humanity. Being left without sustaining sources of meaning, solace, and connection might make you hungry for a more reasonable—and nuanced—account of and perspective on religion.

In a world beset by religious—and atheistic—extremists, is it possible to find a middle path between unthinking acceptance and knee-jerk rejection of religion? In other words, might we acknowledge religion’s history of harm without denying its legacy of wisdom and compassion?

One immensely fruitful way of doing this—which most popular critics of religion neglect—is by putting religion “on the couch” and discovering what it means to people who find it compelling. While thinking about the contemporary battle between theists and atheists, I realized that when people I have worked with in psychotherapy speak about their faith commitments, what is evident is that religion has many meanings and serves various functions, from the adaptive to the defensive and pathological. And unless we appreciate and illuminate that richness, we will misunderstand religion and either naively accept it or unfairly reject it.

Here are some questions one might ask about a particular person’s involvement in religion:

The New Atheists like Dawkins, Harris, and Hitchens ignore the subjective experience of sincere believers and the psychological meaning and function religion serves. And they don’t recognize that religious life might evolve into what Erich Fromm in Psychoanalysis and Religion called more humanistic and mature forms than Freud and other critics of religion delineated. Early Buddhism, Zen Buddhism, Jesus’ teachings, and strands of Judaism, in Fromm’s view, provide ethical teachings fostering love and wisdom.

In Religion for Atheists Alain de Botton suggests that religion can help with “ills of secular life.”  We have, according to de Botton, “secularized badly.” In throwing out what Nietzsche called the “bad odours of religion,” de Botton says that secularists have often eliminated religious practices and rituals that could “mend some of the endemic fractures of the modern world.”

Religion, according to Leszek Kolakowski in Modernity on Endless Trial, is humankind’s way of “accepting life as an inevitable defeat,” by which I take him to mean, an inexorable movement toward death. In the face of our mortality we have fashioned constructive and detrimental responses, which have had both beneficial and destructive consequences.

Religion has, at times, been an opiate for the masses, as Karl Marx famously called it. But it also offers hope, as the late Richard Rorty, not a fan of religion entering the public sphere and influencing our collective political life, argued in his essay “Failed Prophecies, Glorious Hopes.” Religion, in Rorty’s view, can appeal to what Abraham Lincoln called “the better angels of our natures”—our untapped capacity for care, compassion, and wisdom. Religion can also “foster greater meaning, lessen narcissism, and facilitate personal integration and connectedness,” as I suggested in my book Psychotherapy and Buddhism.

In addition, religion has provided solace for careworn souls, heart balm for the weary, refuge for the guilt-afflicted, and community to counter anomie and isolation.

“The faith of the faithless,” in philosopher Simon Critchley’s felicitous phrase, is incomplete and unsustaining. It embraces a purely secular worldview in which rationality is idealized and the individual is disconnected from larger sources of meaning and solace. It can leave individuals unmoored when they are not embedded in something larger than the detached, unencumbered self. In such a world, life tends to be disenchanted—emptied of wonder, awe, and sublimity. Religion can offer intimations of eternity and the glories and serenity of a non-conflicted now. It can also “attune us to a broader and more expanded cartography of states of consciousness and a greater interest in human creativity, love, and morality,” as I suggested in my essay “Religion, Freud, and Women.” Contemplative and mystical practice can afford meaning, offer consolation, and forge connectedness to something vital beyond the isolated self.

On the other hand, in my clinical experiences I’ve seen that devotees sometimes neglect the way religion can foster unthinking submission to ideas and practices that in turn foster intolerance and divide us from people with different sexual, political, or religious orientations. And this often fuels hatred and causes believers to rationalize intolerance and sadistic behavior. I have also known many believers who treat themselves masochistically under the guise of behaving selflessly. Religionists also often pay insufficient attention to the way their ethical ideals can generate shame, as well as nurture inspiration.

“If it is anti-analytic to treat religion as inherently pathological…it is un-analytic to take religious claims at face value,” I wrote in “Religion, Freud, and Women.” In the twentieth-first century we need to explore the complex and multidimensional meanings and functions religion has in the life of particular individuals. Such a non-reductionist approach to religion, in which it is valued for its virtues as well as critically examined for its flaws, might foster a world of greater peace, justice, and humanity.